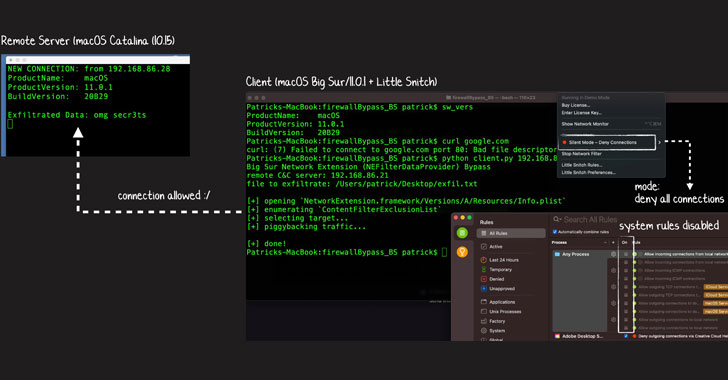 Apple is facing the heat for a new feature in macOS Big Sur that allows many of its own apps to bypass firewalls and VPNs, thereby potentially allowing malware to exploit the same shortcoming to access sensitive data stored on users’ systems and transmit them to remote servers.

The issue was first spotted last month by a Twitter user named Maxwell in a beta version of the operating system.

“Some Apple apps bypass some network extensions and VPN Apps,” Maxwell tweeted. “Maps for example can directly access the internet bypassing any NEFilterDataProvider or NEAppProxyProviders you have running.”

But now that the iPhone maker has released the latest version of macOS to the public on November 12, the behavior has been left unchanged, prompting concerns from security researchers, who say the change is ripe for abuse.

Of particular note is the possibility that the bypass can leave macOS systems open to attack, not to mention the inability to limit or block network traffic at users’ discretion.

According to Jamf security researcher Patrick Wardle, the company’s 50 Apple-specific apps and processes have been exempted from firewalls like Little Snitch and Lulu.

“Previously, a comprehensive macOS firewall could be implemented via Network Kernel Extension (KEXTs),” Wardle noted in a tweet back in October. “Apple deprecated kexts, giving us Network Extensions… but apparently (many of their apps/ daemons bypass this filtering mechanism.”

NEFilterDataProvider makes it possible to monitor and control Mac’s network traffic either by opting to “pass or block the data when it receives a new flow, or it can ask the system to see more of the flow’s data in either the outbound or inbound direction before making a pass or block decision.”

Thus by circumventing NEFilterDataProvider, it makes it hard for VPNs to block Apple applications.

Wardle also demonstrated an instance of how malicious apps could exploit this firewall bypass to exfiltrate sensitive data to an attacker-controlled server using a simple Python script that piggybacked the traffic onto an Apple exempted app despite setting Lulu and Little Snitch to block all outgoing connections on a Mac running Big Sur.

Apple is yet to comment on the new changes.

While the company’s motivation to make its own apps exempt from firewalls and VPNs is still unclear, it’s possible that they are part of Apple’s “anti-malware (and perhaps anti-piracy) efforts” to keep traffic from its apps out of VPN servers and prevent geo-restricted content from being accessed through VPNs.